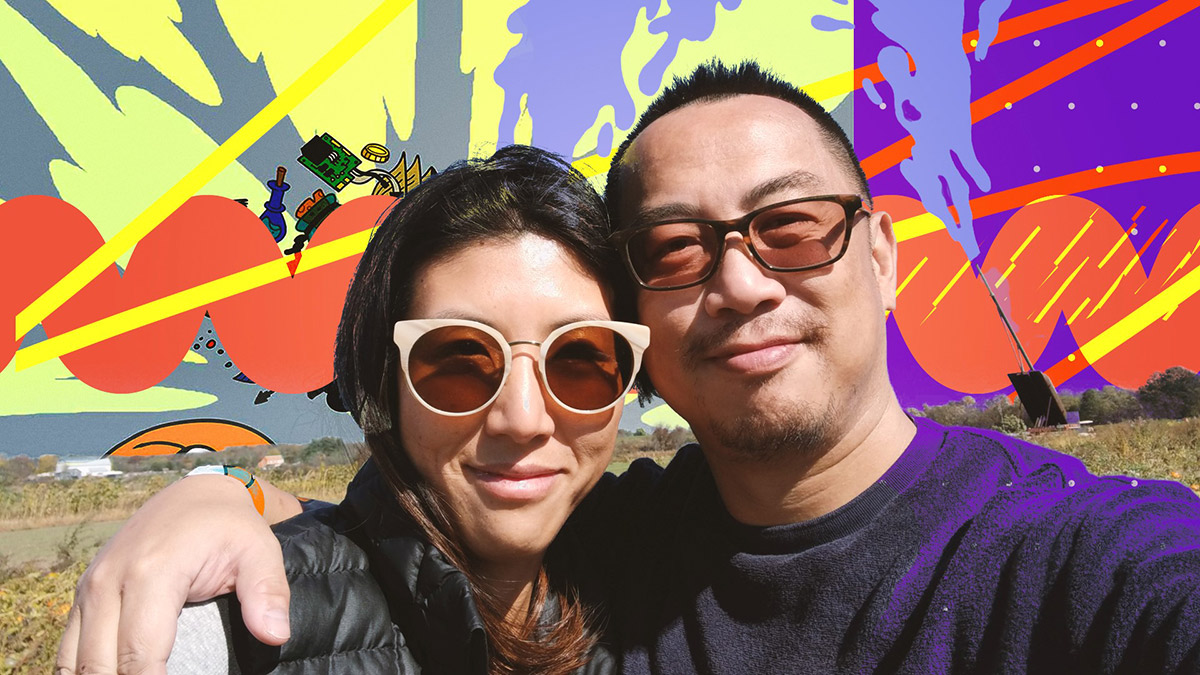 Mina Muto remembers asking Man-Wai Cheung what the word ‘adolescent’ meant. And she recalls him saying that it's like being a kid but not a kid; that you’re always looking to express yourself and be curious about things and explore. It's about an energy, more than anything else. He also mentioned that it was a good way to describe himself, too. Mina quickly realized that these were the same qualities that were driving what she and Man-Wai were in the process of launching, and lo and behold, a brand name was born.

“That’s the essence of how we started,” says Mina, whose title at Adolescent, the New York-based design, motion graphics and branding studio, is VP and Creative Director. “People have asked us over the years about the name, and when we tell them the story, it accomplishes one of our goals. Man-Wai has always said we should want to make people smile, and make their lives a little better.” And that’s what Adolescent does, adds Man-Wai, who’s CEO and Creative Director. Many of the brands they work on aim “to help people learn something new or escape from their everyday norms.”

The studio’s clients include some of the top brands in entertainment, such as Netflix, NBCU, HBO, AMC, Facebook, Tedx, VH1, Sesame Workshop, Nickelodeon, FX and many others. Adolescent has also worked directly for brands like Amazon, Warby Parker, Verizon, L’Oréal and The New York Times, creating everything from fully-animated promos and opening title sequences to brand videos, IDs, interstitials and experiential presentations. Launched in 2004, the studio’s first major project was for rebranding SVT1, the Swedish national broadcaster.

While the shows and networks they handle run the stylistic gamut, there are common threads to Adolescent’s work: It’s often playful, and like Man-Wai says, it’s entertaining. A great example is the work they did celebrating the 50th anniversary of “Sesame Street,” the groundbreaking PBS series for young children, which features the entire cast of lovable puppet characters and creates wildly colorful animation and graphic treatments around them.

Mina and Man-Wai’s story is one of life and love in the big city. They met in the summer of 2001, on Mina’s first day in New York, and at Man-Wai’s birthday party, to boot. “Best present ever,” he says with a smile. Just arrived for a summer project, Mina says she felt a bit jet-lagged, but accepted the invite to tag along with a friend to this party, where she clicked quickly with the birthday boy. “We had very different backgrounds, but shared the same drive,” Mina recalls. “We like exploring the unexpected, and how that can make your head turn.”

9/11 came along and quickly changed all of that. Mina had just flown back to Japan the day before, and now everything had changed. Their relationship was one of long-distance planning for some time, which counterintuitively brought them closer together, Mina explains. Having worked as a designer at Sony Pictures and Euro RSCG Japan in Tokyo, she returned to New York in 2002 and began freelancing around the city while she and Man-Wai worked to turn Adolescent into a reality.

Man-Wai, meanwhile, had moved to New York in 2000, and had been working for Manhattan Transfer as a senior designer, after having spent time at top studios like Plume, Enterprise IG and Attik in London. His diverse background, coupled with Mina’s, is a major influence on how Adolescent sees the world. “We’re minority-owned, and we bring a different point of view to the work we do,” he explains. “We enjoy bringing in lots of diverse perspectives, which often has a kind of wide-eyed openness, and that helps our creative process. We’re also very nimble, and always very gracious – we’re thankful for the opportunities we get, and we focus on our clients and their needs and ambitions.”

That approach has paid off, he adds, as most of their work is repeat business. The studio’s small size – just a half-dozen full-timers hailing from different spots around the world, with support from a regular cadre of permalancers – “means that we feel like a family, and there’s only an A team here,” Man-Wai continues.

Their dedication to fostering diverse points of view is an important part of who they are. This fall, for example, Man-Wai and Mina will take part in mentoring at “Connect 4: Networking for Equality in Design.” A partnership between Pentagram and the Mercy College Design & Animation program, it supports design students of color by opening concrete pathways to leadership positions.

The company has been working with Simian since 2018, and both Mina and Man-Wai say the experience has been “awesome.” They use the service for everything from presentations to review & approval to generating showreels, and both say it’s an indispensable tool they use every day. “Simian is part of our team. They’re very personable and accessible, always so fast to respond,” says Mina. More importantly, adds Man-Wai, “it's tremendously easy to use, and they’re always improving. It feels like they’re always one step ahead of anything we ask for.”

The studio has kept busy during the pandemic, and has a number of major projects in the offing from different sectors in fashion, science and tourism. They’re currently working on motion graphics and design for a live, interactive exhibition space in Times Square, one whose opening has been impacted by the need for social distancing, not to mention the drop in tourism that New York is experiencing right now. Even so, it’s the kind of project that Adolescent loves – “it’s a really interesting process and journey,” says Mina. Sounds just right for a studio with a youthful and curious energy.

Check out some of Adolescent's favorite projects.