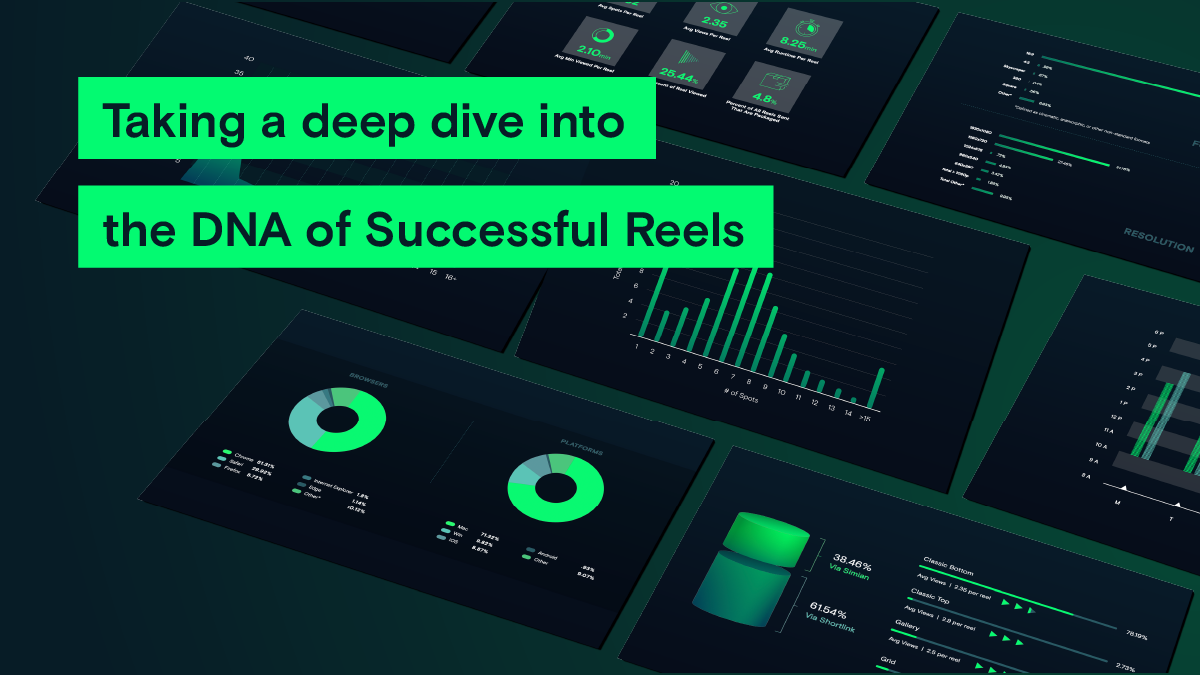 Ever wondered whether you had too many spots on your reel? Or if it was too long? How about when would be the best time time to send it? Tuesday? Or Thursday?

The mysteries behind these seemingly innocent but nonetheless weighty questions were addressed in the recently conducted Simian Reel Insights 2020 WFH webinar. The event peeled back the layers on data culled from over a million showreels sent last year, while the industry was adapting to a remote working environment. Led by Head of Sales Kellie Atton, the presentation included commentary and analysis from Brian Atton, our Chief Operating Officer, and Jay Brooks, our Chief Technology Officer.

Also taking part where three Simian users who represented different areas of the industry: Bernadette Rivero (better known as BB), President & EP of the live action production company Cortez Brothers; Tim Jacobs, Director of Sales for the post production powerhouse Optimus, as well as One at Optimus, it’s live action production division, and Optimus Design; and Ann Asprodites, Owner of Asprodites Reps and co-founder (with Veronica Lombardo of VLM Reps) of the Alliance of Independent Representatives. They shared their own comments and observations about the Reel Insights findings, along with general views on best practices for reel building and sharing.

Our webinar touched on a number of key areas covered in the Reel Insights report, including the optimum number of spots to put on a reel and what’s the best day and time to send reels. We also examined when reels are most likely to be viewed and examined the lifespan of a reel, which looked at how long they continued to be screened after initially being sent. Other data points included the prevalence of different video resolutions and formats and a breakdown of how people are viewing reels – whether on desktops or mobile devices, Mac versus PC and iOS versus Android.

Additional areas not covered in the Reel Insights study but discussed by our webinar panel included the importance of creating specially-curated thumbnails for showreels that better depict how the spot meets with the agency’s creative brief, and the sales advantages of tapping Simian’s engagement graphs to better understand what sections of a showreel are drawing the most interest from agencies.

Many of the Reel Insights findings were supported by Simian’s extensive research with agency Heads of Production, based on our national network of virtual roundtable participants. We’ve surveyed over 100 HoPs about their reel viewing habits and practices, and selected comments appeared during the webinar presentation.

Reel Insights were first compiled in 2013 as part of Simian’s ongoing efforts to provide actionable data that helps its users make more informed decisions and choices during the sales process. The goal is always to get a better understanding of why some reels are more successful than others in getting viewed. After publishing Reel Insights 2013, we did annual reports again in ’14 and ’15, then picked up the study again in 2019, which we presented at the World Producers Summit in Cannes.

“During those years, the data remained relatively unchanged,” Brian said. “But with the pandemic we realized people were working differently – which meant viewing data may have changed, too. And when we dug into the data, we found some significant changes had taken place. Further, we believe some of these are going to stick around after the pandemic has passed.”

A number of key tips came out of the webinar discussions, such as BB noting during the discussion about when reels are being viewed that Cortez has seen reel viewing on Fridays plunge significantly. “This has led to a shift in our workflow, in that we’re not rushing to get reels out on Fridays anymore,” she said. “It’s allowed us to spend more time putting our reels together.”

Another observation came up during the discussion about reel lifespans, as the Reel Insights data points to a marked increase in the screening of reels over two weeks after they’ve been sent, which can be an indicator of continued interest in a director or artist and possible serious consideration for winning the job. BB talked about a phenomenon they refer to as ‘zombie reels,’ in which reels sent out weeks or months ago suddenly spring back to life with renewed activity. “When this happens, we may need to be prepared to move on it quickly,” she pointed out.

The webinar wrapped up with an overview of how users can combine the data from Reel Insights with Simian’s Reel Reports to get a bird’s eye view of how their talent is performing across a number of key metrics, allowing them to tailor or revise their reels and their selling strategies to maximum effect. Kellie also offered a series of helpful tips culled from the Reel Insights report that reps and company owners can adopt to help boost their reels’ effectiveness.

Our participants all shared their enthusiasm for the Reel Insights data, and said it’s going to make a difference in how they do their jobs. “I’m not a sales person, I run a production company, and of course I want to sell my directors,” said BB. “But these takeaways and data points make me feel like a much smarter sales person than I am. It’s because Simian is such a strong sales tool.”

“I have to admit, I wasn’t aware of a lot of these things until I agreed to take part in this webinar,” added Tim. “But I’m totally going to take advantage of what I’ve learned here today.”

Ann summed it up nicely: “It helps our industry when people like BB work with their reps and share data like what’s in these Reel Insights. It’s very, very powerful.”