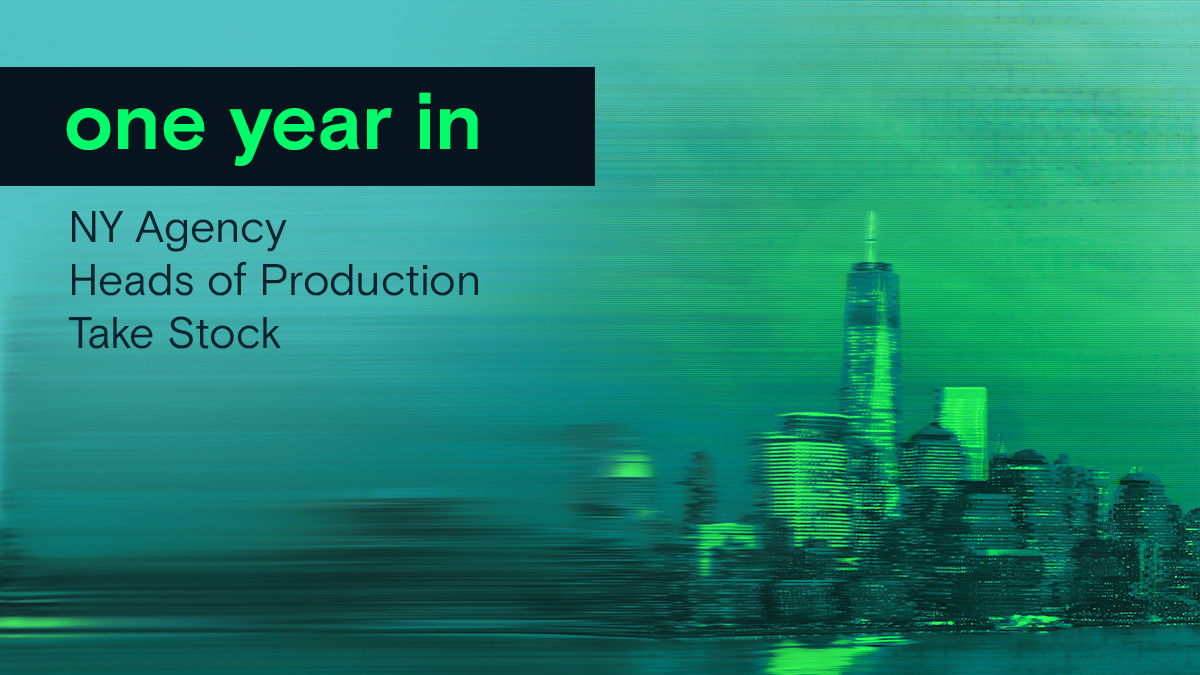 It’s hard to believe, but the pandemic shutdown that rocked not just the ad world but everybody else, too is just about a year old as this blog entry is being written. New York City went on lockdown around mid-March of last year, so it’s fitting that our most recent Simian virtual Advertising Heads of Production roundtable brought over a dozen HoPs from NYC agencies to a recently-conducted Zoom call.

Taking part were executives from such shops as Deutsch, FCB, FIG, Momentum, MullenLowe, Ogilvy, TBWA\Chiat, Untitled, Vayner Media, 21 Grams and 72andSunny, along with 22 Squared in Atlanta. The topics discussed ranged from covering shoots to working with post production to the thorny issue of when it would be safe to return to the office – or if one should even go back at all.

Among some of the toplines that came out of the discussion were that working remotely, particularly in terms of covering shoots, is not popular with anyone – which could be seen as good news for production company EPs and directors who worry that, once the pandemic is behind us, remote shooting will become the new normal. “We hate it,” said one HoP, while another moaned the loss of control they feel when not being physically present on set or on location. “You just can’t sit there and yell at your computer and wonder, what the hell is going on?”

All agreed that, while much can be done remotely – way more than was being done before – it’s not ideal. But another noted that the use of remote technology now allows more people to participate, if only virtually, in the shoot experience, and there’s an educational value to this: “We’re getting back to training people. I’ve been able to have assistant producers sit in on shoots from start to finish. We’d never be able to do that. And that’s an exciting development. Hopefully, that will continue.”

There is, of course, a flip side: "We've shown that we can do things, and so the people who are not involved might say, 'Well, alright, you made it happen,' and it becomes to them the new way of doing things. Yes, we've been making things happen, but just barely.'

Remote working has not been without other benefits, and some of the more notable are found in post production. Geography has been removed as a limitation for working with different editors, for example. “It’s opened things up for us in terms of talent,” said a HoP. “We can pretty much seamlessly work with editors and artists all over the world.” That said, as anther put it, “it’s fucking exhausting, totally exhausting.” Added another, “I miss the chemistry of everybody in the edit suite. Virtually, it’s just not the same.”

While everyone can see a return to production being very much like it was before the pandemic, some say that the post process is probably forever changed. “I can’t imagine that editing will go back the way it was, with someone sitting in a room for two weeks at a post house,” said a HoP. “We’ll have to do more with editorial and post being done remotely,” added another.

The ins and outs of shooting was widely discussed. “We’ve had problems on just about every job so far,” one HoP observed, mostly revolving around the need for last-minute rescheduling based on positive Covid tests among talent. Specific shoots have had to be rescheduled multiple times, too. They’re no longer chasing locations around the world to find places to shoot without restrictions, however: “Mostly we’re able to shoot wherever we want.”

This brought up the issue of who’s attending shoots. Largely they’re being covered remotely, but some HoPs said agency personnel are beginning to return to sets and locations, albeit on a case by case basis. “This is because our clients are starting to insist on going, and this has created a whole new dynamic for the virtual shoot,” said one HoP. Agencies are being very selective about who goes on these shoots, and the overall number is significantly dialed back. “I’d love to go one one,” said another, with a laugh, while someone about to attend their first in almost a year admitted to having mixed feelings.

One important issue that came up was the need to understand that everything in the remote production environment takes more time to accomplish: “It’s not like you can just march over there and say, ‘fix this’ or ‘fix that.’ Things just take so much longer.” Getting clients to understand the elongated process is also a challenge.

One way HoPs are dealing with getting people to focus on shoots remotely has been to put them up in hotels, so they’re isolated from their families or their home situations and can focus on what’s happening on their computer screens. This has been effective when the shoot is happening in a different time zone, so that the agency folks, whether producers or creatives or teams of both, can shift their schedules to accommodate the remote crew. It also gives them a feeling of being kind of on a remote project together and in their own video village.

So what are these HoPs doing to keep their teams connected and positive? One relies on the House Party app (https://houseparty.com/), which they use on midday breaks every other week. “It works better than a happy hour, by the end of the day everyone’s been working for 8 or 9 hours already."

Getting together can feel like just another Zoom meeting, said another, who holds meetings where the department talks about anything but work. “It’s our time to talk.” Another sent team members little bottles of booze with recipes on how to make drinks – kind of like Blue Apron meets the Old Town Pub.

The experience of being together, even virtually, was clearly appreciated by everyone who took part; notably this was one of the highest turnouts yet for a virtual Simian HoP roundtable. We’ll continue to hold these sessions for agency and client production leaders around the country, as well all take pains to make sure we’re working smarter and more efficiently.