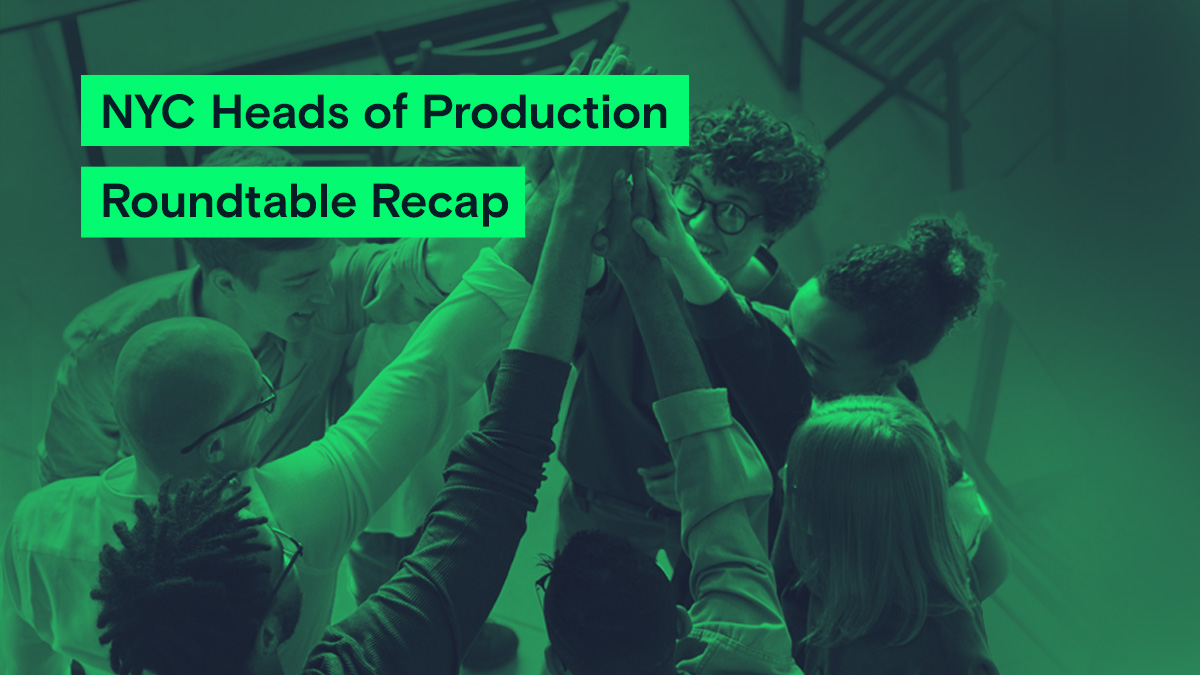 All part of the job: HoPs grapple with tracking reels, an influx of new talent and being back on set.

Simian gathered over half-dozen agency heads of production recently for another one of our regular HoP virtual roundtables. With a sense that the worst of the pandemic is finally behind us, these production leaders talked openly about a wide range of issues, including a surge in costs that they’re seeing almost across the board, an explosion in new talent available to direct a wider palette of content than ever before and a return to shooting on set or on location.

And while many pandemic-related issues have ebbed, one thing hasn’t changed a whole lot over the course of 2022, and that’s attendance in the office. It’s still largely a hit or miss thing, according to our panel, and varies from agency to agency, largely based on whether or not they’re holding company-owned or independent.

Indeed, for the ad industry at large, going back to the office remains a hot topic. (Adweek, for example, recently tracked how the various holding companies are approaching this thorny subject.) “For a lot of us it’s really just a matter of personal choice, or what the business needs are,” one production head commented. While no one said their agencies were mandating a return as of yet, some are getting strong suggestions. “There are still Zoom set-ups for meetings for those who aren’t there,” said one HoP, “but you can tell they want us to come in.”

And while producers have always worked remotely in some fashion, what’s different now is that producers were in the office when they weren’t out shooting or editing jobs. Now, with the more senior producers staying remote all the time, “it’s a bigger challenge for the juniors in your department,” one HoP noted. “Once you’ve established yourself as a producer, you start to think, ‘Why do I have to go into the office when I spend so many days away from home on jobs?’ So now it’s easier on them, but the juniors aren’t getting the same osmosis from everybody else.”

The HoPs spoke at length about the process of dealing with reel submissions. In previous roundtables, producers have told us they can receive up to a hundred reels submitted for jobs. How do they keep all this organized? How can the process be made more efficient? Everyone has an opinion, but the overriding theme was to maintain the all-important human contact between producers and reps or EPs that helps to vet and curate both the talent and the submissions.

“Trying to streamline this process makes a lot of sense, but at the same time, you want to hear why so-and-so likes this director or that director,” offered one HoP. “How else are you going to get to know these directors? When you start to struggle with managing your review process – when you’re on your second page of people and you’re seeing names you don’t even know – you have to rely on relationships.”

Another HoP says that producers often can’t review all the reels they get anyway, “so they look to the reps and companies that you trust, since they’ve already done the curation for them. Hopefully these companies or individuals have a good idea about who’s right for the project.” While removing that touch means “you’ll lose something in the process,” one HoP observed, “there’s got to be a quicker and easier way to get the list down to something the creatives will actually look at.”

Actually screening the work falls to weekends and off hours, one producer admitted, but added, “That’s part of my job – it's knowing the right people to reach out to, the right people to pass over, and basically being the filter. And when you talk about automating any part of this, well, there’s something about the ‘analog’ feeling to this process that has a creative aspect to it.”

All agreed that there’s a constant parade of new talent coming into the commercial directing ranks, particularly now that agencies and brands are pushing to work with more BIPOC directors. How are HoPs managing this influx?

“We no longer have to say to reps that we need some minority or POC directors in the pool,” said a HoP. “It’s no longer a part of the conversation, it’s become a practice. And if there are people they want to submit that I don’t know, then I’ll talk to the rep or the EP.”

“You often do this through a production company that you’ve worked with before and that you trust,” said a source, “but I’ve begun to expand the list of companies I work with because there are so many now.”

Another HoP said that even the profile of what they’re looking for in directors has changed. “We’re not just interested in commercial directors – there are so many multidisciplinary talents you’re looking for now, whether it’s for social or working with influencers. I’m never just looking for someone to do spots, and that’s when working with our younger producers, who might be more clued in to different kinds of talent, comes in.”

“Yeah, now instead of just having creatives tell you which directors they’re interested in, we ask what kind of content they’re looking to create,” one HoP chimed in, “and we’ll find the talent that’s fluent in that area. And there are so many more people to choose from.”

And again, the ability for producers to be together in the same room comes into play: “It’s important that our people are able to meet and go over this, as there’s something about the camaraderie and experience of discovering new talent together and being able to being some fresh perspective to the process that’s special.”

With labor issues facing producers, particularly the push to unionize some freelance elements of the production process, HoPs say they’re seeing costs rise across the board, from production managers even down to production assistants. This movement has been similarly affecting labor costs for non-union jobs, several noted. And while the producers largely say they’re supportive of the need to pay people what they’re asking for, it’s a different matter when it comes to explaining this to clients.

“I feel super torn about this, because we care about these people,” was how one HoP put it, “but every conversation about money with clients is a difficult conversation, because it’s always more expensive than they think it’s going to be. It puts us in a tough spot. It’s like when Covid costs hit; we just had to explain that this is how things are going to be now.”

On the flip side, they all agree that travel to shooting locations is back. “Remote shoots? No one likes them!” was one comment. They’re actually more labor intensive, believe it or not, and not very satisfying.”

“And the communication channels are difficult,” someone observed. “When you’re in video village and everyone is talking, that’s one thing, but when everyone is texting each other on the side, that just doesn’t work well. You have to set up firm guidelines up front. I’m looking forward to not having to deal with that as much anymore. There have been some bad behaviors learned from this experience, like clients thinking they don’t have to come to the set. And we have to clamp down on our producers, to not allow this kind of behavior. We can’t be sitting around waiting for someone’s text.”

On the flip side, reduced travel has opened a lot of advantages, too, especially from a budget standpoint. “You can do all sorts of amazing things, like working with overseas talent, when you devote that travel budget to creating new solutions,” one HoP summed up. “So we’re getting back to what I was hoping for in terms of how we shoot, even though some people thought they weren’t going to have to travel again, especially the cost consultants. But we all want to be there; it’s about the personal interactions.”