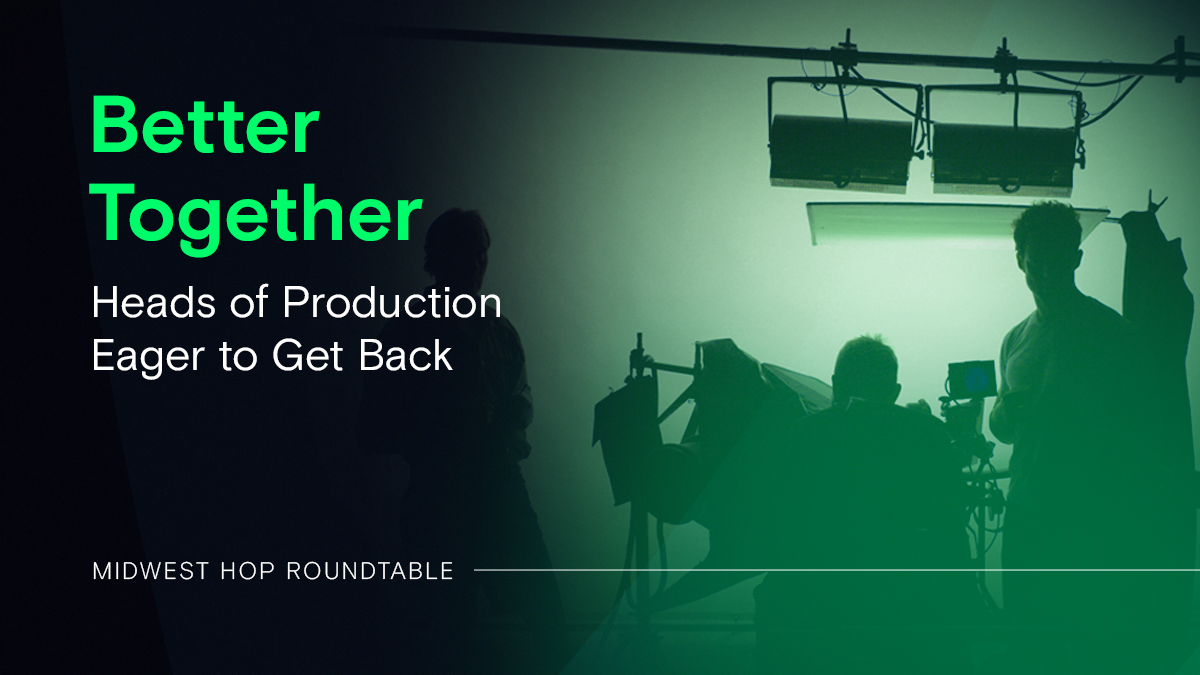 Whether on set or in the post suite, production leaders are itching to return to in-person collaboration.

Have we had enough of remote work yet? Yes, indeed. That seemed to be the pervasive sentiment as Simian held its most recent advertising Heads of Production virtual roundtable. In attendance were HoPs from agencies in Chicago, Minneapolis, Austin and Atlanta, with the list including such shops as OKRP, DDB, Abelson Taylor, Fitzco, Hearty, Peterson Milla Hooks and FCB, along with Allstate and Target.

Getting back together in a post-pandemic world was on everyone’s minds, and the degree of impatience was only tempered by the understanding and appreciation for the safeguards, risks and rules that are being put in place. Even in cities and states where offices are opening back up, companies are adopting the ‘wait and see’ approach that’s become a commonplace refrain, albeit in a new and hybrid form. “We’re pivoting to a work from anywhere plan, which is what I think a lot of people are doing,” says one HoP. “Much will depend on what the work specific people are doing, and whether they actually need to be in the office versus working remotely.”

“But we’re missing collaboration, so there’s a decided emphasis on finding ways for us to be together again.,” was how someone else put it. Added another, “I just really can’t wait to get back to working in person, being on set, shootin’ the shit about ideas and just being around people. It’s what we do. The creative juices come from bouncing ideas off each other.”

In general, the mood of the HoPs taking part was optimistic and upbeat, if not a bit weary. Most said they have been able to able to shoot wherever they want, but almost everyone has experienced Covid-related hiccups. “We’ve pretty much have someone test positive on just about every shoot, but I’m sure it’s the same for everybody,” said one producer who’s been on two shoots since the pandemic started. “And I’ve been absolutely blown away by the rigor and dedication of the production community to keep us working. It was quite remarkable.”

Producers are also looking forward to the new dynamic of vaccinations, as those numbers continue to grow. The issues revolve around the ability to find out what the vaccination status is of people you’re working with on shoots, which remains somewhat uncertain.

In terms of staying on top of what’s happening, most HoPs says they’re turning to a variety of sources: “Our producers are always talking to production companies and post companies,” one noted, while another, who works for a holding company-owned agency, noted that HoPs across the holding company have been meeting virtually on a weekly basis to share information, tips and best practices. That’s also happening between offices of the same network, while HoPs at independent shops say they’re talking informally with their peers and taking advantage of events like the Simian HoP roundtables to stay up to date.

Commenting on the remote production process, one HoP noted that everything seems to function well enough, but getting clients to pay close enough attention while sitting in a remote video village was a challenge. “There’s multiple distractions for them, left and right – their dogs, their kids, what have you. Getting them to pay attention when the camera is rolling is a big concern. And you end up texting them and saying, ‘We’re moving on, we’re done with this shot.’”

Commenting on the changes coming to post, the belief that fewer agency and client folks will be present in suite for post sessions is now pretty widespread, which predicts a major shift for how post production has been done in the past. “The days of going to L.A. for an edit are over,” was one comment. “Clients have realized they don’t have to pay for that. But by and large the creatives and producers are dying to get back into a room and work with people.”

One HoP noted that remote work may work well with edit, VFX and color, but presents a different set of challenges for audio post and mix work, since checking the quality of the mix is limited by online audio quality.

Another issue cropping up as agencies start to send people back to shoots or into post suites is deciding who that’s going to be. “When you can only send one or two to the shoot, that can be a challenge.” While it was noted that there can be hesitancy from some agency people to expose themselves, in other areas there’s a push to get back on set. “We’re even hearing it from clients – they feel they need to be in attendance on certain shoots,” one HoP pointed out. Added another, “In a lot of cases, being on the set is the safest place in town,” due to the precautions taken and the level of testing that’s been done.

The added cost to production to cover extensive testing and monitoring for Covid exposure has caused some advertisers to be more selective about what they decide to do in terms or creating content, one HoP noted. “There’s been a lot of prioritizing and re-allocating of resources, determining what needs to be done versus what existing assets you can work with,” this person noted. For many brands, media buys have been locked in, and the need to keep filling the pipeline with commercials and brand messages had not gone away: “A lot of clients have had to spend money on production and post, but they’re now spending it in a different way.

Indeed, dealing with Covid limitations on shoots is beginning to feel routine, one HoP said. “You get used to the boxed lunches and the compliance officer with the clipboard, making sure you’re all standing far enough apart,” was one comment.

Looming on the horizon is the issue of vaccinations, and how or whether agencies and brands can use vaccination status as a guide to working together or being able to attend shoots or post sessions remains a question mark. But overall, it bodes well for the future: “I think we’re all looking forward to everyone getting vaccinated and getting back to what passes for a bit more normalcy,” was one comment.

Admiration for what everyone has gone through to get to this point gave the discussion a feeling of being over the worst of the crisis. “If you’d asked me on March 12 of 2020, ‘Hey, what happens if everyone goes home for a year?’ I would have told you, ‘Well, advertising stops!’” said one HoP, half joking. “And that’s why I’m just so impressed and proud of what this industry, and our community, has been able to do.”